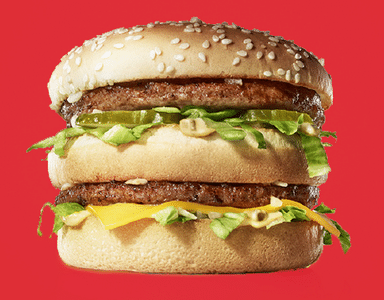 In the 1970s, Mcdonalds came out with an ad that was just a bulleted list. You may not be old enough to remember it, but they trotted it out again in 2008 for nostalgia’s sake. The ad said:

It was in print:

Guarantee you it was on the radio, but my quick Google search is coming up empty on radio ads.

So why did this ad work?

This ad doesn’t work unless you hear it twice, but it’s easy enough to remember if you do. It’s a small enough number of ingredients to remember without too much difficulty, yet it also conveys the complexity of the sandwich. They’re literally training you on product knowledge as if you were about to start back on the line to make them for customers. The jingle, if sung fast enough, is actually a bit of a challenge. They even went a level deeper in some markets, attaching the jingle to the reward center of the brain.

These ads are all 30+ seconds long. They’re repetitive. They’re visual. You don’t get any of that with a bulleted list.

Sales tools inspire, they let you picture what it would be like to have the product, tell you what you’re missing by not having it, create demand by arousing a feeling inside you by appealing to the pride, envy, lust, gluttony, and/or sloth centers of your brain to make you crave it.

Bulleted lists don’t do this. They’re not so helpful when used to attract and hold attention. They’re monotonous. They’re unhelpful in snap decision-making. They can be useful in conveying emotion, but only if you’re at the paragraph level with each bullet, and then it’s a pretty much a story.

Yes, it’s European (gherkin). There’s also something specifically different about the ad this time around.

The colors make it an infographic. You can see the cheese, imagine the pickles, the bun, and the special sauce. This one shows the composition of the sandwiches they’re selling. It tells a story reminding you of the experience of eating one of their sandwiches. I’m ashamed to admit that my mouth is watering a little bit right now; they got me. I haven’t had any one of these sandwiches in over ten years, but I’ve been to a Mickey D’s on a long drive once or twice, and I’m a sucker for the hash browns (which you won’t see in this ad campaign).

Ads are stories about how whatever they’re trying to sell you improves your lifestyle. You can give the hiring manager the lifestyle they want by taking work off their plate, delivering more revenue and more favorable internal/external perception, and/or reducing costs and stress. Tell the story your target wants to believe; one that grabs their attention right away and begs them to keep reading.

A story gets someone to want something emotionally, while bullets nudge a prospect along the path to buying one list item at a time.

Usually, the only bulleted lists we use on our résumés are chronological career histories, separate from job functions and achievements. That part of your résumé ain’t going anywhere, but neither are stories, and the stories are what sell.