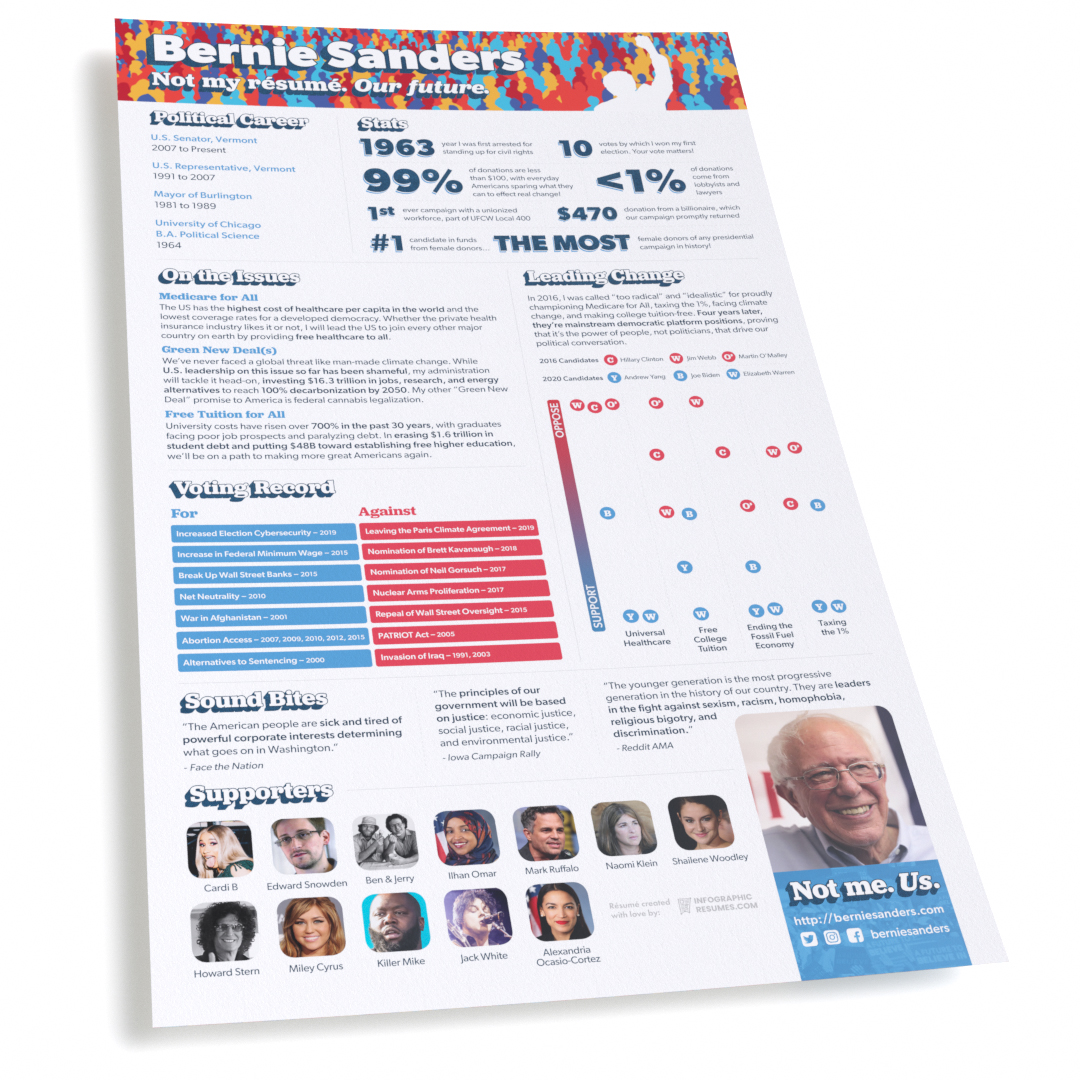 Editor’s note: This is one of three in a series of candidate résumés created by InfographicResumes.com. This post outlines how we made design and content decisions on Bernie Sanders’ résumé. We also created résumés for Andrew Yang and Elizabeth Warren.

Bernie’s candidacy brought “Democratic Socialism” into the mainstream political discourse. His ideas energized a movement that most certainly encouraged a Blue Wave in 2018.

Bernie’s history as a political activist, civil rights champion, union supporter, and anti-war protestor goes back to the early 1960s. Bernie has lived the life of a public servant, championing social good, fighting corporate greed and the military-industrial complex. You might have seen the picture of Bernie being dragged away by police in a college protest. You might have known he voted against wars in Iraq in 1991 and 2002. You may have known that he voted against the PATRIOT Act. You may have known that he has been a lifelong supporter of a woman’s right to choose. Whenever Bernie took a stand, he stood for the fair and just treatment of all Americans.

When we design a résumé, we try our best not to waste the reader’s time with bullet points rife with platitudes. You’re looking to tell someone that everything in your history adds up to you being the right person for this job right now. The consistency of Sanders’ policies over time is something we leaned on in telling that story.

We like to point out big, impactful events of someone’s career history. The average person isn’t going to read this résumé if it’s two pages. Honestly, we think we can say enough about someone with one page for them to make a decision one way or another on a candidate. We always include a Stats section, and we lead with the most impactful ones. Highlighting his history of civil rights activism where the eye naturally focuses first in this section.

When we design a personal brand, we like to ask people to help define their brand “personality” with brand words. We came up with hopeful, courageous, united, populous, and integrity. While we’re not official members of Bernie’s communications team, we did participate in the Design for Bernie Slack group in 2016, and these words were definitely part of the vibe then. We put “hopeful” in most of the sections, specifically the Leading Change and Reactions sections. For “courageous” and “populous,” the Voting Record section helps. For “united,” we highlighted the number in the Stats section about his being the first unionized presidential campaign. The integrity is everywhere. He’s #StillSanders.

Back in that Slack group, we were given the style guide for the campaign. It’s changed a bit: they’ve added the Gibson font in different weights and continued using the Jubilat font that they used in 2016 but started using an italicized version for the first time for this campaign. While Gibson Regular continues to be used for the text, Gibson Bold is generally used for hopeful, aspirational policy points and pointing out the positives.

We used Gibson Bold for the header and the numbers area and kept with Gibson Regular for the text.

The Jubilat font is used for a lot of different messaging in the campaign, much more often-used than the Gibson. The serif is used for accusatory, damning, and shocking information or authoritative speech and confident demands/promises to rectify injustices.

We used it for the headings and subheadings. You can see the juxtaposition below. It lists all the care that is “Covered” in Gibson (aspirational, hopeful) and switches to Jubilat for “Medicare for all” (in the confident belief that Medicare for all is getting done).

We especially wanted to highlight certain things about the candidacy for which the media-at-large doesn’t love to give credit, like his high rate of support from the Black community, bolstered by cultural arbiters Cardi B and Killer Mike. Support from progressive filmmaker Naomi Klein, 3/4 members of “The Squad,” and his broad appeal to female donors shown in two connected statistics shows strong support from the progressive female demographic.

We took some artistic license in adding one iconic image from the 2016 campaign. Not from the campaign itself, but an image that came from the movement. We loved Aled Lewis’ “Not Me; Us” poster and repeated that background in the header – it’s a wonderfully striking image that crystalizes the diverse, people-centric movement on which the campaign is built.

We wanted to use this iconic content as it’s an image that will forever be associated with the campaign and its supporters, but specifically because it harkens how powerful user-generated content can be in driving the narrative. Remember that your brand isn’t just what you tell people, but it’s how it resonates, what people believe it is, and how they’d convey it to someone else if they were referring you.

A final note on “Brand Personality;” it’s also your humor. We added a little of that to the On The Issues section in the last lines of the last two sections.

We’re excited to watch how the primaries play out. Good luck in 2020 and beyond, Bernie! #FeelTheBern!

P.S.: Here is Bernie’s résumé without the 3D effect for legibility. We design most résumés on one legal-sized page. Over 80% of the time, résumés are read on mobile first, and legal fits more pleasantly on mobile screens. Try it.