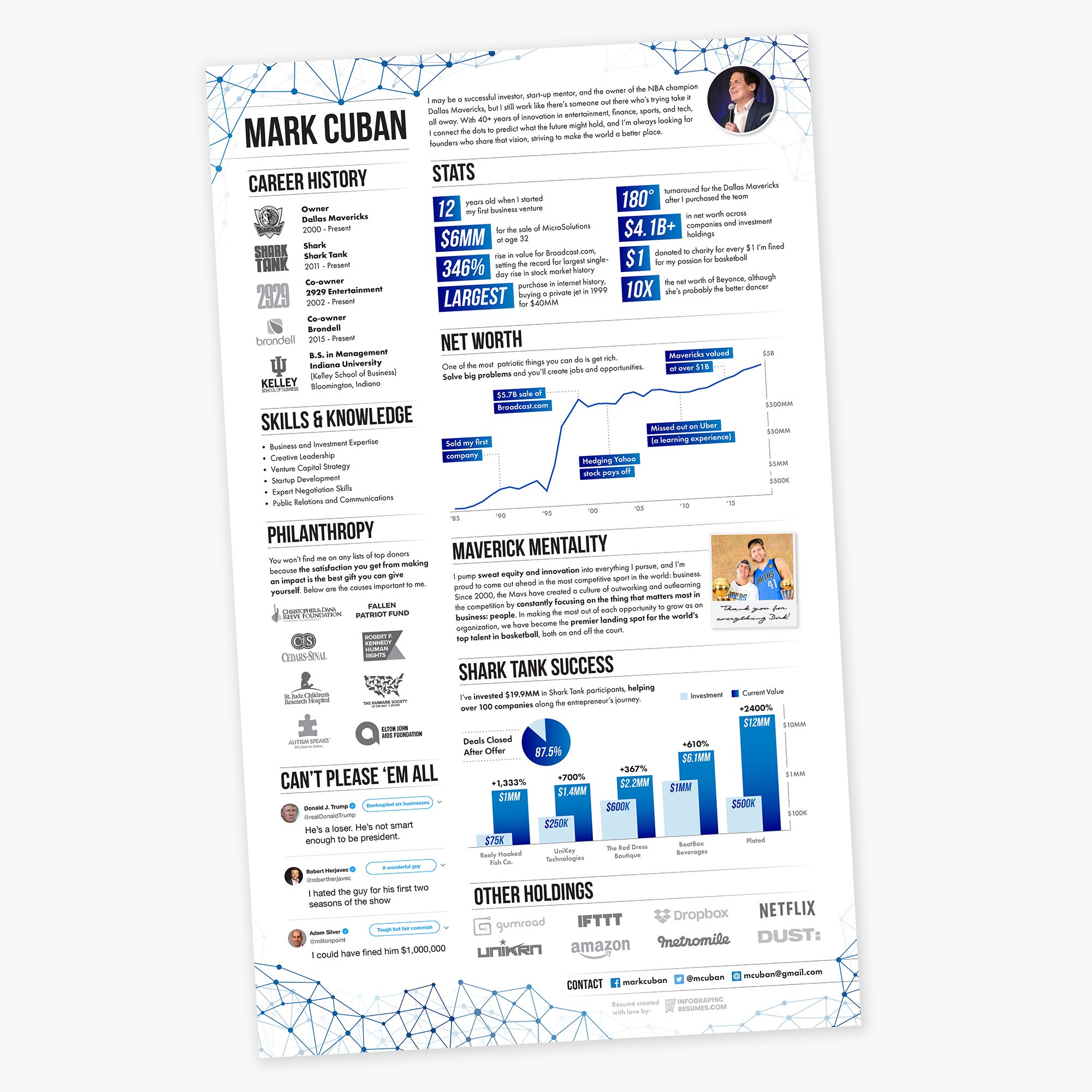 I’ve thought it would be fun to visualize careers of some respected entrepreneurs for a while, and when Mark posted an infographic résumé to his LinkedIn last year and said he thought it was cool, I had my first victim. His career was going to look a lot better than that of the person he posted, so we over here at infographicresumes.com set to work.

The way we build résumés, we work with the client to figure out what’s important, but with this one, we had to dig without the client’s help. I’ve been a Mark Cuban fan for a long time (I’ve owned pleaseinvestinmycompanymrcuban.com since 2010 but don’t have the right pitch for that site yet), so I had some ideas about what I wanted to put on the résumé. Shark Tank stuff, Mavericks stuff, his big .com sales, but it was a lot of fun researching more about the guy to find out what makes him tick.

Mark is a capitalist. A dirty word in some circles, and don’t get me wrong, with the Amazon burning right now, we’re feeling the effects of capitalism getting out of hand. What’s important to take away from Mark’s position here is that humans create, they manifest the ideas they have to make the world a better place, and by each individual driving toward that ideal, we progress. Someone has an idea, most people say it’s preposterous, then they build it, then billions of people use it. Mark built Broadcast.com – streaming live TV via the internet. He knew that was where the world was heading. He was early. He led. Now we’re there in no small part thanks to Mark.

Look back through time and you’ll see every inventor and futurist pilloried against the backdrop of the way things always have been done. This is the plight of the individual who dares to say, “this could be better.” If you’re this person, I want to work with you. Your résumé won’t appeal to the people who love the way things have always been done, but if you want to work for those people, I’m not really excited about that commission. Unless you need to get inside to blow that shit up, then we can talk.

Which brings me to last thing I did before sending Mark the résumé; I read The Fountainhead. It’s Mark’s favorite book and I think it’s mine now. My career in the résumé business feels like a parallel to the career of the protagonist, both in the results of the work and in the amount of detractors that slide into the comments telling everyone that “these things don’t work,” and “it needs to be scannable,” and “I tried to make myself one of these and I got no calls back.” It’s an interesting perspective on the work of the individual vs. the work of the collective and how mediocrity doesn’t advance society. It made me believe in what I do even more.

In the final act of The Fountainhead, the protagonist blows up a building he designed as it had been bastardized by “secondhanders,” designers attached to the project who added unnecessary flourishes to the project, stripping the individuality from the building, welding onto it a way-it-had-always-been-done mentality. In building each résumé, we make something beautiful, complete, encapsulating your career in numbers and deeds, wasting little space with platitudes.

The biggest sticking point people have when deciding on an infographic résumé is that they don’t believe they have the numbers that would make it work. You might not have $4.1B, but trust me, you have the numbers that define your work effort as dissimilar to the others in your field fighting for that same position. With every client, we jump on a call to see what you have and dig for more. I’ve designed over 750 résumés since 2011 and I can count on one hand the number of people who didn’t have the numbers, and in every one of those cases, the résumé had been purchased by a previous client for a son or daughter entering the workplace for the first time.

One thing that I would like to note about the creation of this résumé, we actually didn’t get all the content that we wanted. We did this résumé for Drew Grant a while ago; she had a section of tweets from important people who said nice things about her. I thought we could do this same section for Mark. Seemed easy enough, right? Just go to Twitter, search for the most popular tweets containing @mcuban from all time. Well, Twitter doesn’t want you to be able to do that. I ended up making a snarky detractor area instead, and after reading that book and what it thinks about external praise, it actually worked better for Mark’s persona the way it came out (and it was also just a little fun dipping into the conspiracy angle with the Adam Silver secret Twitter account for my friends over in r/NBA).

This won’t be the last résumé we do in appreciation for the individual, the inventor, the futurist. We’ve got a list of people who we’ll be profiling in the near future, and if you have any suggestions, we’re listening. We love celebrating personality. If you have one and want a résumé like Mark’s, let’s blow it up.